My family is enjoying some food and each other, I'm enjoying a nice alcoholic beverage, while I sit here in my shorts on a nice, sunny day here in Australia. What better time is it to test out some Radeon R9 290X GPUs? 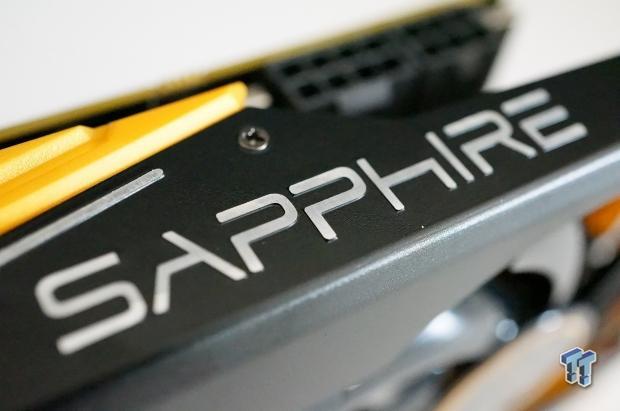 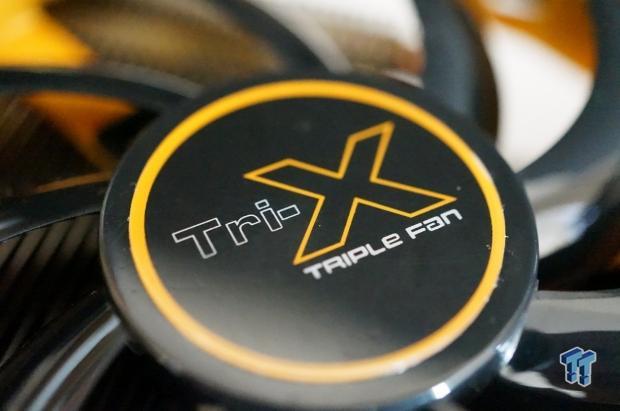 I've played with the Radeon HD 7970s, and while they perform well, the new Radeon R9 290X GPUs are based on the Hawaii architecture, play much better with higher resolutions such as 3840x2160, or 4K, and no longer require a physical CrossFire connection. 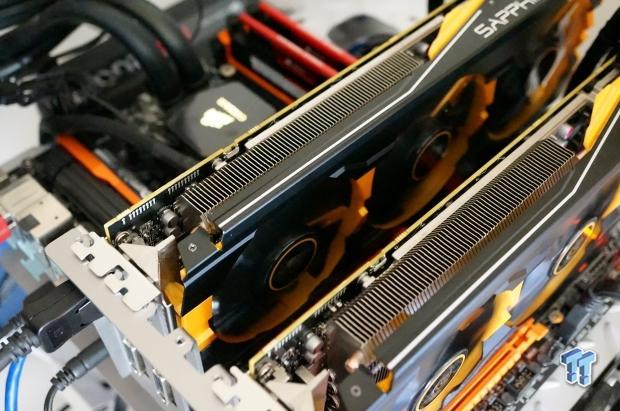 We'd like to thank Corsair, AMD, GIGABYTE, Corsair, and InWin for making this all happen - without you, we couldn't have done it. AMD and SAPPHIRE really stepped up here, providing the two SAPPHIRE Radeon R9 290X Tri-X GPUs we're testing, so I'd really like to take the time out and personally thank them - it means a lot to have your support, and we wouldn't be here today without it. 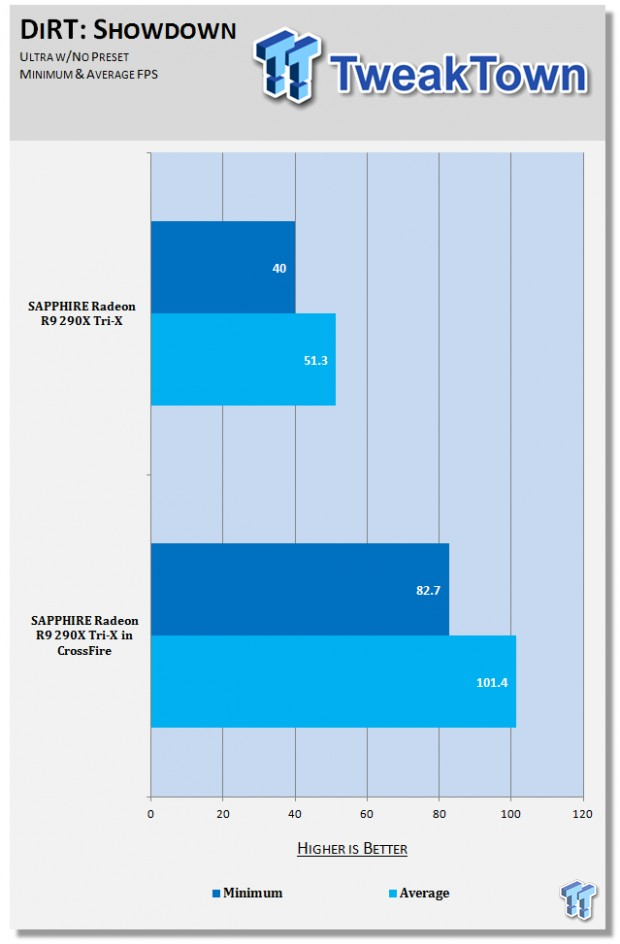 Starting off with DiRT: Showdown, we can see some truly amazing scaling on our new SAPPHIRE Radeon R9 290X GPUs. With a single R9 290X, we have a minimum FPS of 41FPS, and an average of 53FPS. But, turning CrossFire on, we see right on 100% scaling. 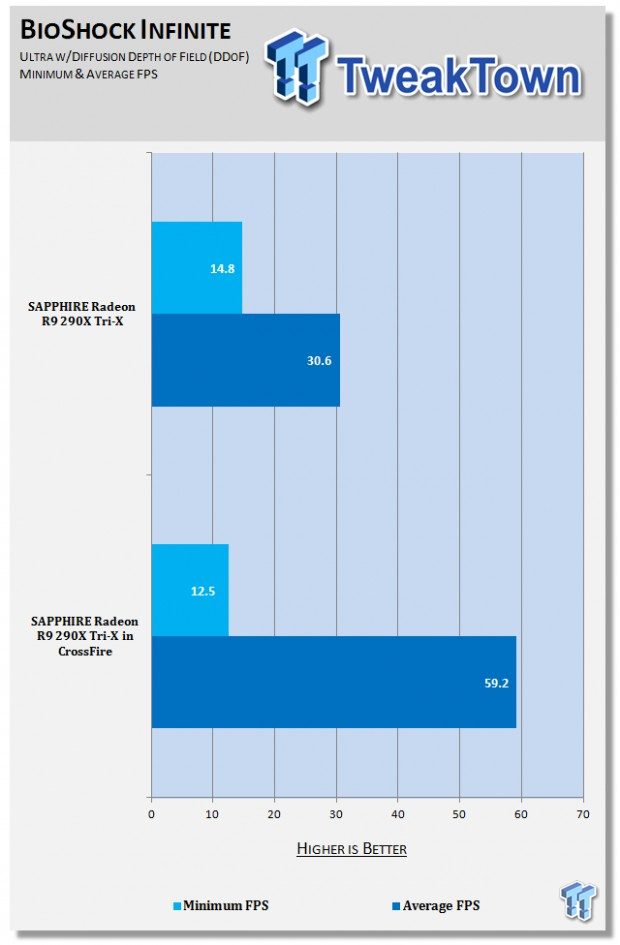 BioShock Infinite is another game where we see close to 100% scaling, but only with the average FPS. The minimum FPS on our single R9 290X is 14.8FPS, while the average sits at a just-playable 30.6FPS.

Turning CrossFire on, the minimum FPS drops to 12.5FPS, but the average FPS jumps from 30.6FPS to 59.2FPS - another 100% scaling result. This made BioShock Infinite much more playable, where it felt quite amazing to play in 4K. 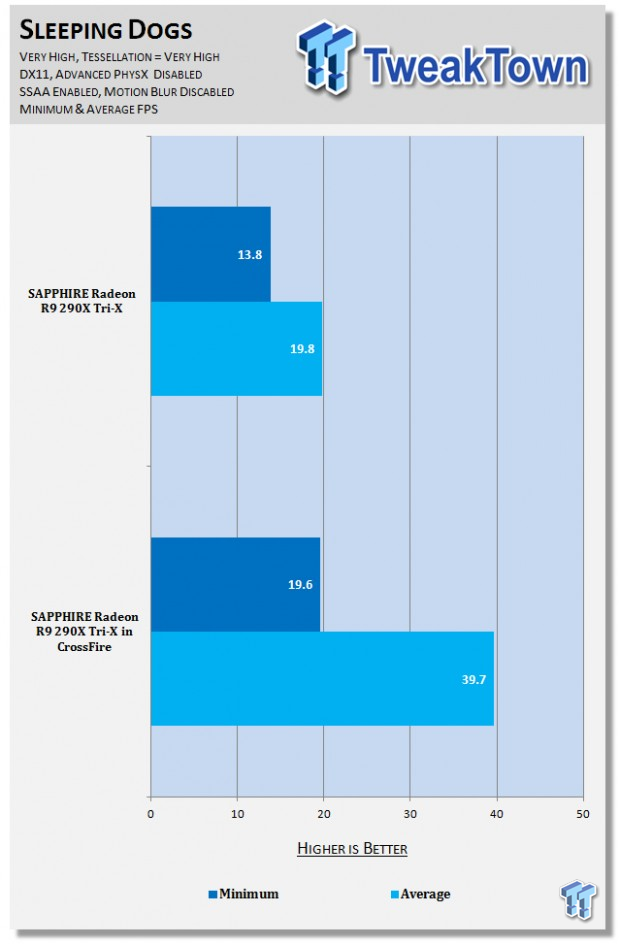 Sleeping Dogs is another game where we see strange minimum FPS behavior, but great average FPS results. Starting with the single R9 290X, we have a minimum of 13.8FPS and an average of 19.8FPS, far from playable. 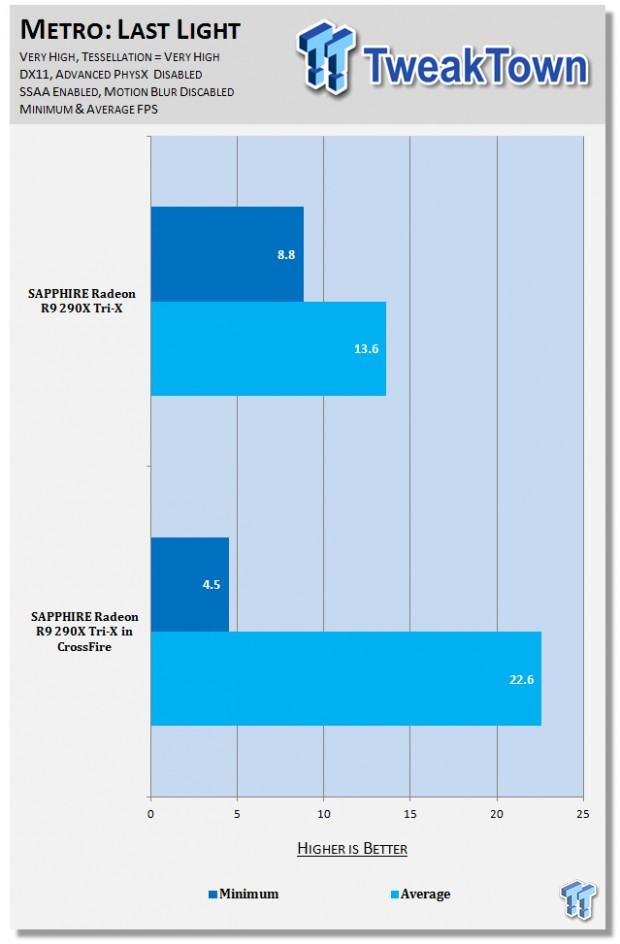 Metro: Last Light is the newest addition to my benchmark lineup, and holy cow does it look gorgeous in 4K. The graphics come at a price, with the minimum FPS sitting at just 8.8FPS, while the average is not much better at 13.6FPS.

Enabling CrossFire saw a huge dip in minimum FPS, dropping from 8.8FPS to just 4.5FPS. The average FPS jumped from 13.6FPS to 22.6FPS. This is unplayable, but we'll be playing around with Metro: Last Light in the coming weeks with another article concentrating just on this game in 4K. 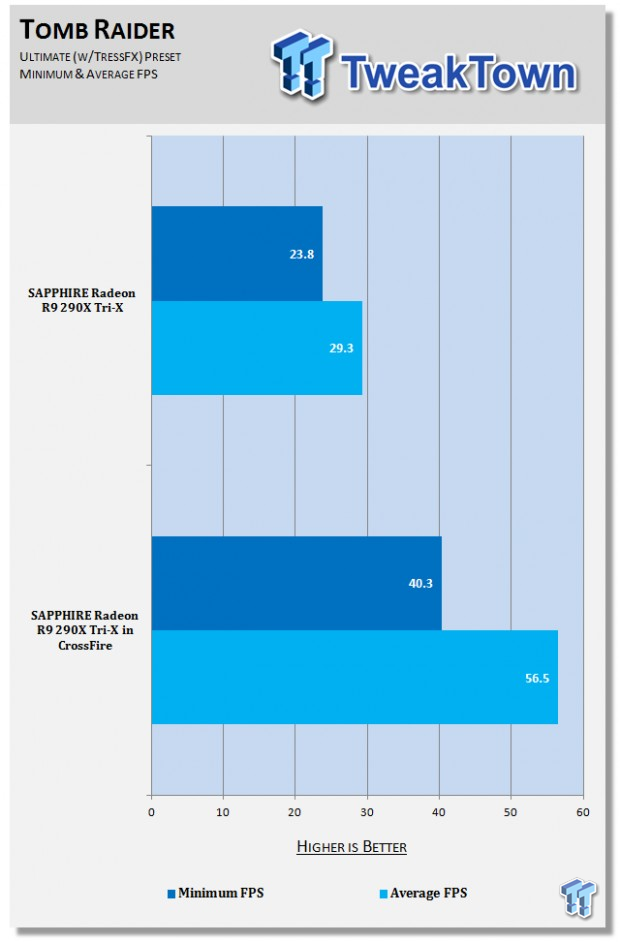 Tomb Raider, another example of 100% scaling with our average FPS results. Beginning with our single R9 290X, we see a minimum of 23.8FPS and an average of 29.3FPS.

Cranking out the CrossFire goodness though, we find the minimum frame rate jumping from 23.8FPS to 40.3FPS, and the average leaping from 29.3FPS to 56.5FPS. Very close to that 60FPS magic. 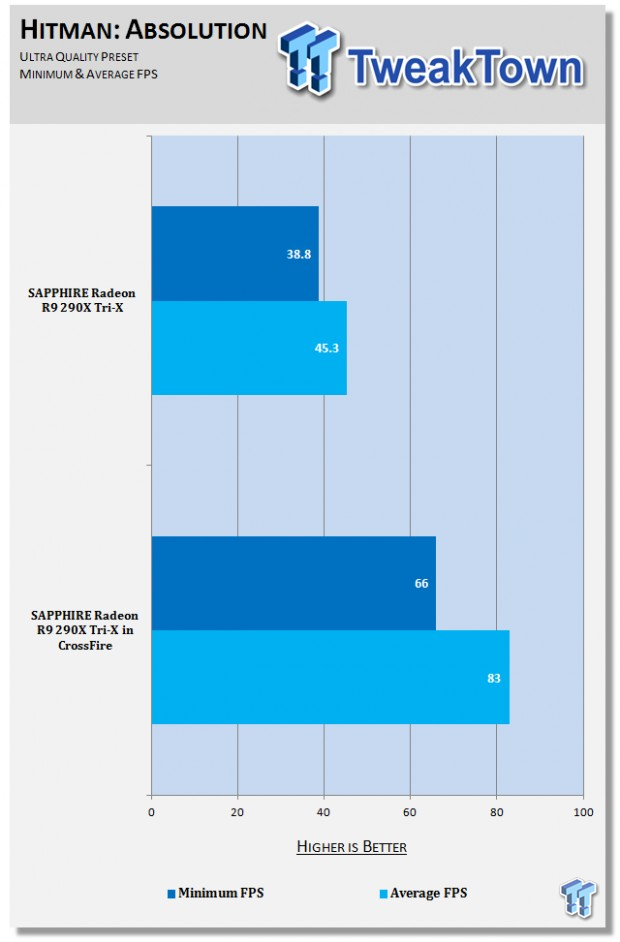 Hitman: Absolution scaled incredibly well on our R9 290X CF setup, to round off our testing. We start with 38.8FPS minimum and 45.3FPS average on our single Radeon R9 290X Tri-X GPU.

So there you have it, SAPPHIRE's brand new Radeon R9 290X Tri-X GPUs tested in 2-way CrossFire, at 3840x2160 - or 4K/Ultra HD. We had some impressive results, with some of our games pushing a massive 100% increase in performance, but what we need to do from here is test an Ivy Bridge-E CPU, 32GB of RAM, and two more of these GPUs.

Right now, if you want to game at 4K with 60FPS or so, you're simply going to need to spend some serious money. A 4K display isn't cheap, and it's not anywhere near mainstream right now. What makes things better, is that Seiki Digital has a 4K display for under $1000, way under $1000 actually, which makes 4K gaming possible, without spending thousands and thousands.

My advice would be to wait on 4K for a couple of months, as we should see some HDMI 2.0-capable displays being rolled out, which will be capable of true 60Hz at 4K resolutions - this is when the 4K revolution will truly begin.

Keep checking back, because in the coming weeks and months we'll be diving into some 3- and 4-way testing with our 4K display, and maybe chunk in another two 4K displays for some serious high-res testing. What do you think?