The last time we looked at the AMD Radeon HD 7970s in CrossFire, we were running stock clocks. But, you are on a site called TweakTown, so we decided to tweak our cards. Throwing some overclocking onto them, and re-running our tests to see how much of an improvement overclocking had at 7680x1440. 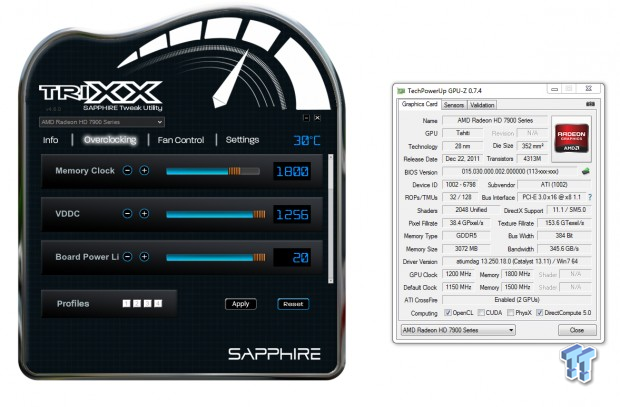 We were able to drive our cards up to 1200MHz on the Core, and an astounding 1800MHz on the Memory, which you can see, above. 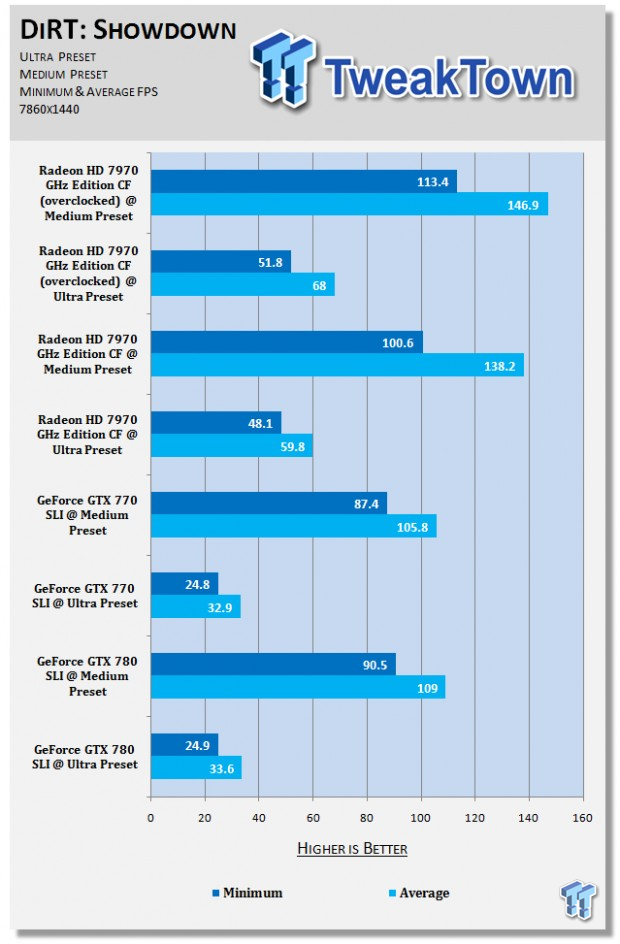 DiRT: Showdown is another game that benefits from our overclocking, with the Medium preset pushing out 100.6FPS minimum, but when overclocked, throwing out 113.4FPS. The average FPS jumped from 138.2FPS to 146.9FPS, which isn't great, but when it's the result of a free overclock, you can't complain.

The Ultra preset had slightly more impressive numbers, with the average FPS jumping from our stock clock results of 48.1FPS to 51.8FPS - nothing to see there, really. But the average FPS jumped from 59.8FPS to 68FPS, now that is a much better result. 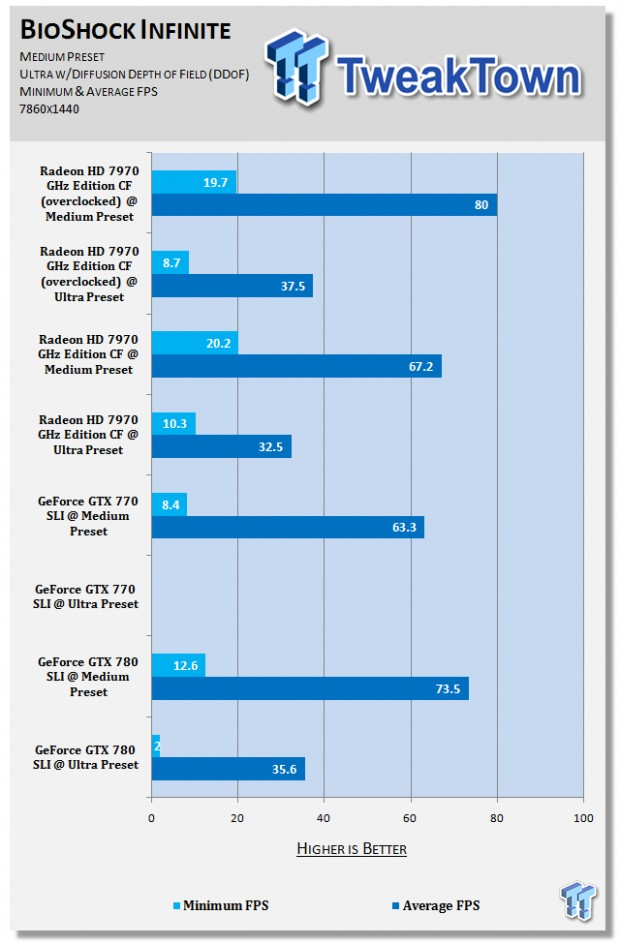 BioShock Infinite is a stressful game for hardware, and the overclock on our Radeon HD 7970s definitely helped, especially with the average FPS. On the Medium preset, we saw an very slight, indiscernible decrease in minimum FPS from 20.2FPS at stock clocks, to 19.7FPS. The average FPS on the other hand, jumped from 67.2FPS to 80FPS, a great increase there.

Moving onto the Ultra preset, we saw the minimum FPS drop from 10.3FPS on the stock clocks, to 8.7FPS on the overclocked HD 7970s. The average FPS once again, increased, from 32.5FPS to 37.5FPS, which is a great jump from a free overclock. 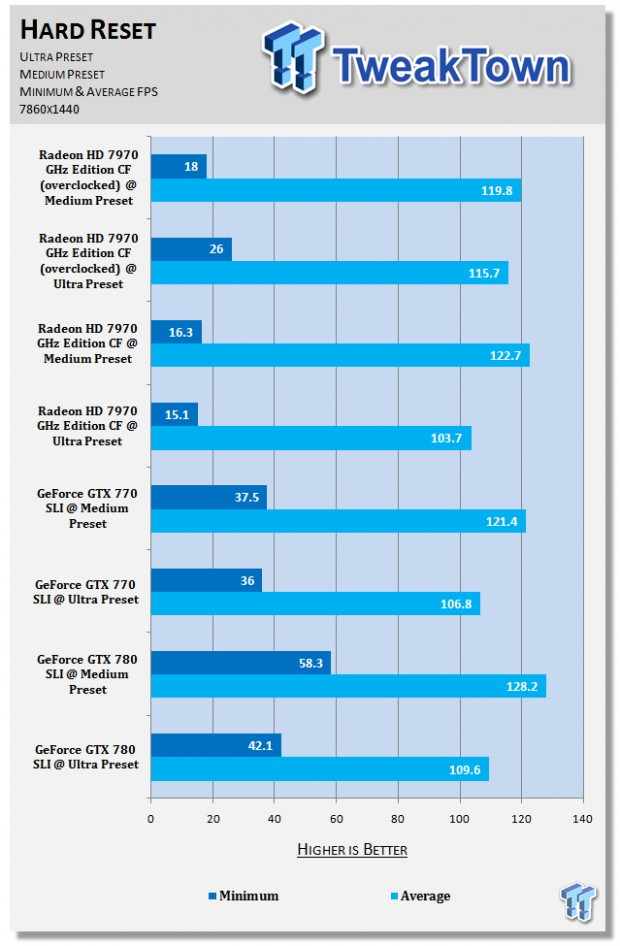 Even cranking up to the Ultra preset didn't see a change in average frame rates, but those minimum frame rates saw a huge jump. Starting with the minimum FPS, which jumped from 15.1FPS on stock clocks, to a much-better 26FPS - this is the type of increase I love to see!

The average FPS jumped on the Ultra preset, from the stock clock results of 103.7FPS to 115.7FPS. 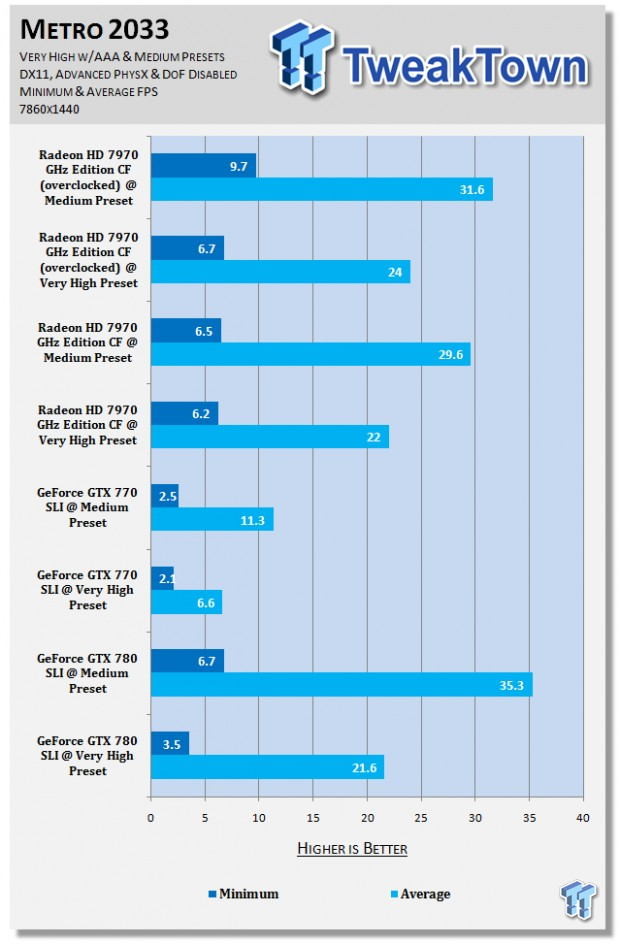 Metro is already so intensive, but there's no real performance improvements with our overclocked HD 7970s in CrossFire, which is disappointing. We have the Medium preset minimum FPS increase from 6.5FPS to 9.7FPS, but the average only jumps from 29.6FPS to 31.6FPS.

The Very High preset doesn't really shift, either, with an improvement of just 0.5FPS in the minimum FPS department, from 6.2FPS to 6.7FPS. The average frame rate is not much better either, increasing from 22FPS to 24FPS.

Tomb Raider would not run for me on this overclocked setting, I'm going to fiddle with it and come back with some results, hopefully. Damn you, Lara. 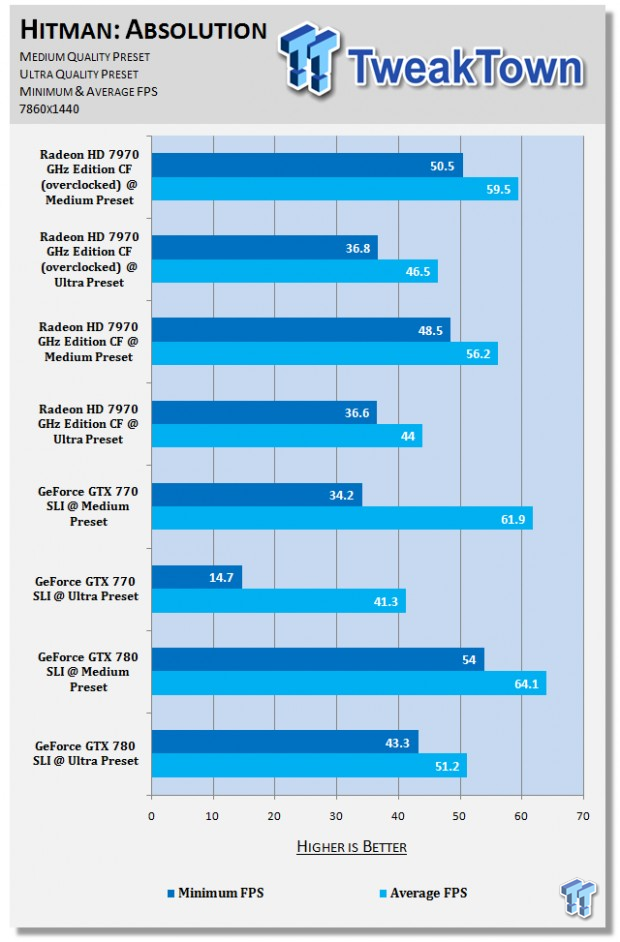 Hitman: Absolution just will not cooperate with an overclock, where it doesn't really provide much change at all. On the Medium preset, we see an increase in minimum frame rates, from 48.5FPS on stock clocks, to 50.5FPS when overclocked. The average frame rates were slightly better, from 56.2FPS to 59.5FPS.

The Ultra preset wasn't that much better, seeing an increase in minimum FPS from 36.6FPS to 36.8FPS - which you would never ever tell the difference between. The average FPS jumped slightly from 44FPS to 46.5FPS.

Overclocking our HD 7970s helped in most of our games, and even when it's not by much - those tiny increases can make the game feel much better. Moving from 32.5FPS to 37.5FPS in BioShock Infinite at Ultra is a good example. Sure, it's not a huge jump, but when you're hovering so close to 30FPS, an improvement of 10-15% is quite good.

I'm still sitting on the fence in regards to playing games at this resolution on the highest detail. On the Medium presets, the frame rate is usually 100% on top of the Ultra/Very High/Ultimate settings, which is a much better position to be in.