Ah, Battlefield. I have so many memories of the franchise over the years, but Battlefield 4 is becoming a quick favorite of mine. Even more so at 7680x1440. 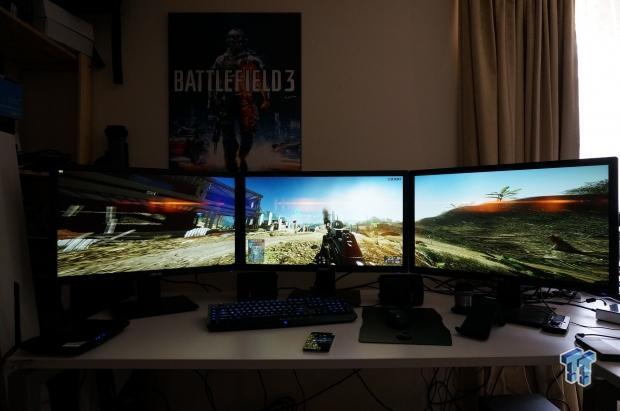 Testing BF4 can be quite hard, as there is no built-in benchmark. I decided to run the game on 'Radio Communications' map, with 32 players in the game. This gives a much, much better in-game feel of the frame rate of a proper multiplayer game.

I ran the test for 5 minutes each time, to get a better minimum/average FPS result, too.

Enough talk, let's get on with the benchmarks! 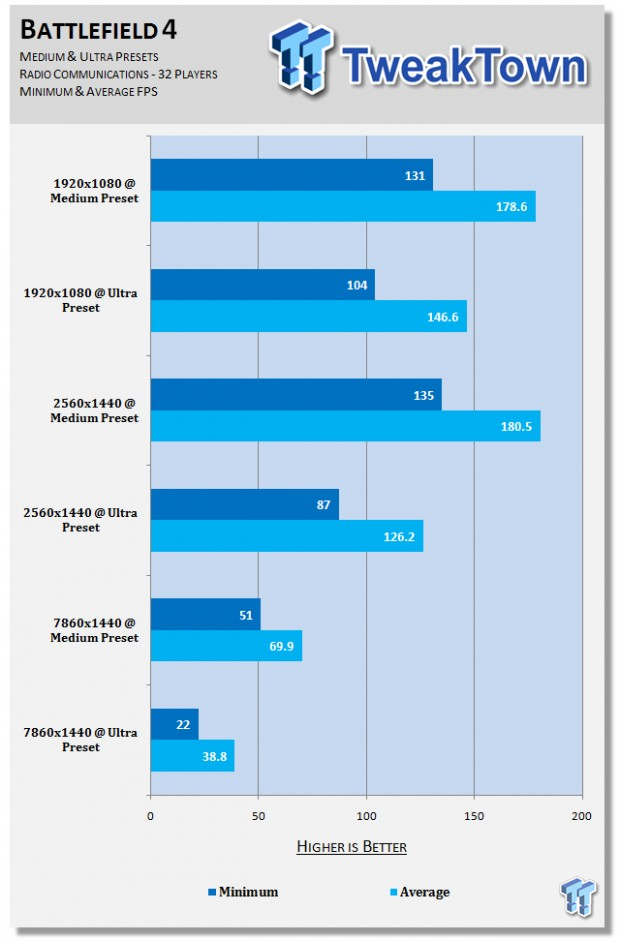 As you can see, at 1920x1080, Battlefield 4 absolutely flies on the Ultra preset, which by default has 4xMSAA enabled. The minimum FPS we sustain is a nice 104FPS, while the average is an impressive 146.6FPS.

Cranking it all the way up to 7680x1440, we find some interesting results, as usual. The Medium preset is where you want to be: 51FPS minimum, while maintaining an average of 69.9FPS - over 60FPS, and we're golden. Clicking the dial over to the Ultra preset, which is harsh, we have a minimum of 22FPS, and an average of 38.8FPS, which isn't too bad at all, considering the amount of pixels being rendered on screen at once.

Battlefield 4 at 7680x1440 in a word? Astounding. It's almost too much to take in, and that's what makes it great. Pushing our PCs and technology to the edge. Gaming on one of the most bleeding edge game engines, at one of the harshest resolutions available.

This is how it's meant to be done - sure, not everyone can do it - but if you have the money to do it, you simply won't regret it. The wraparound effect of the screen really pulls you into the game, and the sense of scale thanks to the massive resolution is second to none.

The only way forward from here? Triple 4K testing, coming soon on TweakTown.

Below, we have some more screenshots from the game.