Looking to upgrade to Intel's 5th generation processors? All MSI Z97 and H97 motherboards are compatible.

Congrats to BIOSTAR, as its Z97X is the first Intel Z97 mobo to receive Windows 10 certification.

ASUS says that its SABERTOOTH Z97 Mark S 'cannot be broken' as demonstrated by this great PC mod.

Steven tells us all about MSI's Z97 Gaming 9 ACK motherboard. If you're looking for really strong audio and networking features, take a look.

Today TweakTown marks a return to our consumer motherboard reviews with a close look at Supermicro's C7Z97-OCE by our new editor Steven Bassiri.

Supermicro is known for its range of enterprise and server motherboards, but they tried their hand at the enthusiast market recently. Here's Steve's take.

We take a look at a tiny Mini-ITX Intel Z97 based motherboard under the ROG name from ASUS. Here's Shawn's full review of the ROG MAXIMUS VII IMPACT.

We check out the new ASUS Z97-A, priced at the mid-$100 point, and see if it's a board you should be considering. Follow on as Shawn tells us all about it.

We move on to another Z97 motherboard, this time from ASRock under the Fatal1ty series. Let's see how this "killer" gaming focused motherboard performs.

Codename Devil's Canyon is out from Intel. We see just what the new Core i7 4790K processor is all about as we put it through our CPU testing regiment.

We look at our second MSI Z97 motherboard today. Let's see how the new Z97 GAMING 9 AC performs under our tests as Shawn puts it under the spotlight.

NEWS
We sneak a peek at the USB 3.1 enabled MSI motherboard

We see MSI attach next generation USB to a new motherboard.

A new motherboard and few other features see an updated ASRock M8.

ASUS have a bunch of ROG ready motherboards for the Z97 platform.

Today Shawn gets to share his love for the Mini-ITX platform on the new Intel Z97 chipset via the shiny, new ASUS Z97I PLUS motherboard. Let's go!

We move on to our next Intel Z97 motherboard in line for testing. We are looking at the Z97X-UD5H from GIGABYTE. Let's see what Shawn thinks of it now.

The Z97 train hasn't stopped, and today we move onto the Z97 MPOWER MAX AC from the folks at MSI. Read on as Shawn gives us the full details of this board.

We move from one Z97 motherboard into another. Let's see what ASRock is doing via the Z97 Extreme4. Read on for Shawn's full thoughts on this new board.

Intel's latest chipset is the Z97, and today we check out our first Z97 motherboard coming from ASUS in the form of the SABERTOOTH MARK 1. Let's go!

We check out one of the upcoming CPUs that the Intel Haswell refresh brings to the table. Let's see just what the i7 4790 and Z97 can do in our testing!

Intel's new CPUs are nearly here, with GIGABYTE allowing us to tease its upcoming Z97X-SOC Force motherboard to the world. Let's take a look #throughglass.

ASUS' new Z97-WS is very fresh out of the gate, so be sure to get yourself a cup of coffee before you start this review - you won't want to miss a thing.

The launch is a little ways off, but today William gives us a quick look at the upcoming ASUS Z97-WS workstation motherboard featuring the Z97 chipset.

We get a special sneak peak at ASRock's upcoming Z97 series of motherboards, and a look at one of their first boards to feature a m.2 SSD port. 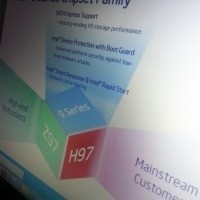