We found 37 items for the tag: XIGMATEK

Xigmatek's Soundwave-A mid-tower computer case may not be the best we have seen, but for the asking price, it's hard to deny.

NEWS
XIGMATEK pushes its a bright red power supply to market, the S550

XIGMATEK has released its red Vector S550 power supply complete with blue LED fan and an 80 Plus Silver rating.

Today Chad checks out a new mini-tower computer case from Xigmatek, the Spirit M. We were quite surprised by what you get for the solid price.

Xigmatek puts the team to work looking to put the case company in the running for a SFF chassis with style - the result is the Aquila.

Xigmatek's Vector P700 PSU performs quite well and presents us with a feature that we've never seen before. Let's take a close look now. 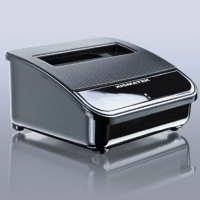 Xigmatek brings new life into an old cooler design with the introduction of the Dark Knight Night Hawk Edition.

Xigmatek is back for some more torture testing on the PSU test bench. Check out how well the new Centauro 1000W performs from start to finish.

Xigmatek used a set of fresh eyes with this redesign and introduced a new mid-tower chassis with the Midgard II.

"The legend of silent gaming cooling system" is what Xigmatek says about the new Prime SD1484 CPU Cooler. Let's see what this "legend" is all about!

Marcus Agrippa commissioned the original and Xigmatek commissioned a case with the same name for all of us. Let's see if Xigmatek's Pantheon will stand the test of time!

Xigmatek tries going green with their latest 1KW PSU, the NRP-MC1002. Does it deliver?

Xigmatek has one of the best full tower cases we've ever used, and it only costs around 200 USD.

Norse mythology isn't lost with Xigmatek, as they aptly name their new mid-tower chassis after the place where Thor and his hammer reside.

Available within the next few weeks.

Chad's back with another VGA cooler for the test bench. Time to wind it up and see how the dual-fan Bifrost goes under a good amount of pressure.

Xigmatek rethinks the S1283 coolers and offers us an enhanced version. Let's see if they made the right adjustments.

While memory cooling is nothing new to the overclocking community, Xigmatek has thrown its hat into the ring with the Cuirassier-N002 memory coolers.

The last of the trio gets tested from Xigmatek. This time we are testing the Achilles S1284C with optional i7 mounting hardware.

Xigmatek has sent another cooler to the labs. This time Chad looks at the Dark Knight S1283 with H.D.T. technology.

From CES preview to full review, Xigmatek has shipped the Thor's Hammer to our lab for testing. Let's see how well this i7 compatible cooler performs.

and what a weapon it is!

and at a very respectable price.