We found 9 items for the tag: UN

NEWS
UN fails to agree on NOT making Terminators, killer robots on the way

UN isn't doing it, so governments need to 'draw a moral and legal line for humanity against the killing of people by machines'.

The United Nations has warned 'food systems are failing', and that millions are expected to enter poverty.

United Nations considers whether global food shortages will happen over the COVID-19 crisis.

NEWS
More than 50% of world's population doesn't use Internet 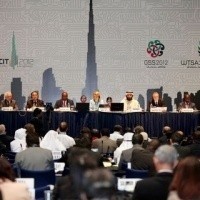