We found 9 items for the tag: TETRIS

Nintendo have announced that Tetris 99 will be getting a second DLC for players to enjoy.

Tetris Royale is a 100-player mobile battle royale set in the world of Tetris, for Android and iOS devices.

NEWS
'Tetris' movie becomes a trilogy, we don't know why

Bound to be a classic for the ages.

It's an end of an era - Game Boy Tetris to be pulled from Nintendo's eShop says claims Nintendo UK and we go on a nostalgia overload.

Tetris has hit the big 3-0 and now programmer Alexey Pajitnov has detailed the rise and rise of the simple block-based puzzler.

Ever wanted to play Tetris on the side of a building? Most of us have, but Philadelphia will be hosting the game on a 29-story building! 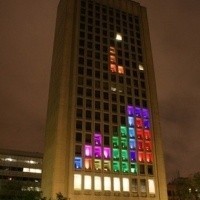