We found 5 items for the tag: SUPPLIER

OnePlus seeks to clarity supplier claims, says that it does not blame third parties for cable or adapter issues.

OnePlus attempts to shift some blame on its suppliers, stating 'cheaply made' chargers aren't for everyone. 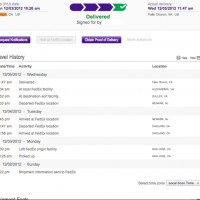 Apple adds US Quanta Computer to list of suppliers, should be where US iMacs are produced.

NEWS
Foxconn to be run by Robots in the future?

Foxconn is looking at replacing employees with robots.