We found 17 items for the tag: STRONTIUM

Fujifilm will use Strontium Ferrite (SrFe) technology to hit 400TB by 2030.

Scientists have observed the birth of a heavy element from a neutron star collision.

Russian spy hackers have been detected inside of some corporate printers, nothing on the internet is safe.

Strontium adds to its Nitro lineup with a Lightning micro reader for iOS which also comes with a 64GB 566x memory card.

Strontium's Mobile Wi-Fi Cloud is a feature-rich storage device for your tablets and smartphones. Let's take a close look at it now.

Tyler tells us all about Strontium's Nitro Plus Nano, a small form factor flash drive with both a great performance and asking price.

Strontium's Nitro iDrive allows you to add storage to your Apple iOS device. Performance is pretty solid, but is the asking price too high?

In the market for a high capacity SDXC memory card solution? Read on as we look at the Nitro Plus from Strontium and see how it works and performs.

We look at the latest microSD from Strontium, the Nitro Plus. Follow on as Tyler tells us all about this new 64GB U3 MicroSDXC memory card.

The Strontium Nitro offers top capacity in the SDXC form factor. Read on to see if this memory card carries top performance as well.

Need additional storage for your Android or Windows Phone? Read on as we look at the Nitro from Strontium.

Strontium looks to lift your computing experience with the new low-cost HAWK Series. This is the first time we've published a SandForce based drive with Hynix 26nm flash. This is also our first public... 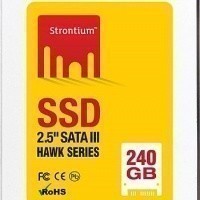