We found 9 items for the tag: STREAMING SERVICE

HBO Max teaser trailer shows a glimpse of its massive library, except the Snyder Cut of Justice League.

Disney+ announces everything that will hit the service on its launch in the US on November 12.

NEWS
Disney+ goes on pre-order starting at $7 per month

You can pre-order Disney+ now ahead of its official launch on November 12.

Netflix and Comcast made a deal which is considered to go against Net Neutrality. 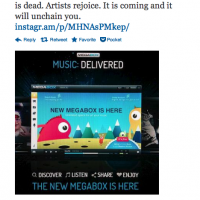