We found 6 items for the tag: STOLEN

NEWS
iPhones and iPads stolen during looting are worthless, here's why

Looters are quickly realizing that the iPhones and iPad's they stole from a Apple Store are almost worthless.

Snapchat users are at risk if they used a third-party app service, which has been hacked, with thousands of photos and videos stolen.

Medical patients in Los Angeles County should be aware of a potential security breach, with a stolen computer containing 168,000 patient records. 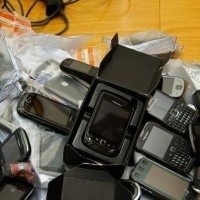