We found 6 items for the tag: STEPHEN HAWKING

Hawking didn't reveal when he plans to fly to space, but at the age of 75, he might be one of the oldest people to visit space.

Stephen Hawking postulates that aliens visiting earth will be like Columbus discovering the Americas.

According to the world's smartest man, the future of mankind is in the stars, not on Earth.

Professor Stephen Hawking has concerns artificial intelligence could accelerate the end of mankind. 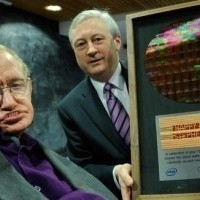