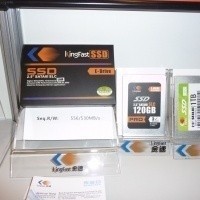 KingFast shows off some RAID 0 SSD goodness at Computex 2013.

Several of these high speed SATA II drives have been located and are now priced at less than $1 per GB thanks to an exclusive deal with MDD & TweakTown!

RunCore extends their SF-1200 product lineup with the Pro V Plus, a 25nm flash model.

Apacer delivers one of the best SandForce SF-1200 packages we've seen to date, but does its performance compete with the competition?

At CES we saw the Inferno for the first time and have been crossing our fingers ever since. Please, please let it come in red.

ARTICLES
How to make an SSD: Touring A-DATA's Taipei Factory

Chris and Cameron visited A-DATA's Taipei SSD production facility and captured on video how to make an SSD.

The landscape of the SandForce market is changing today with many drives getting more capacity. MyDigitalDiscount.com celebrates big with OCZs number.

Dual 100GB SF-1200 drives in RAID 0 explored. Step inside for the juicy numbers.

Other World Computing might be from Planet Mac, but their SSDs are fantastic while staying cost effective.

Its metaclorian count is off the charts, yet the price is down to Earth. Worlds fastest drive? - Let's take a look and see.

The race to release the first drive featuring SandForce's consumer SF-1200 is finally over. Hand Corsair the milk and the trophy.