We found 10 items for the tag: RAID CONTROLLER

We test a prototype of the new Adaptec 12Gb/s ASR-8885 RAID controller with two high-powered arrays in RAID 0 and RAID 5. Amazing performance inside. 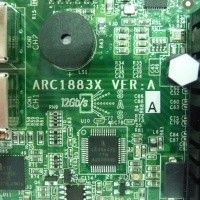 Storage with 12Gb/s transfers is on the way and Areca are prepared.

Adaptec releases their new Series 7 family of RAID controllers. We take a look at them in this preview.

Putting new technology to work is the Areca way. The name might have stayed the same, but this new ARC-1882i gets a boost in performance from its PCIe 3.0 connector.

Hot off the heels of our LSI MegaRAID review, Chris is back with a look at the Areca 1882i RAID controller.

HighPoint delivers an entry level RAID controller that is low cost and reliable.