Job listings have shown that Avalanche Studios are working on a HUGE new triple A title.

RAGE 2 developer id Software is super keen to get into development of RAGE 3 as soon as possible.

NEWS
RAGE 2, a singleplayer game, has a post-launch roadmap

RAGE 2 might be singleplayer-only, but it's still a live game. Well...sort of.

RAGE 2 is ready to unleash total havoc quite soon.

Bethesda is GIVING AWAY a custom-built Dreamcast-styled gaming PC to celebrate RAGE 2.

NEWS
RAGE 2 is a live service game without multiplayer

RAGE 2 is another of Bethesda's experimental live games, but this one's different.

NEWS
RAGE 2 looks like a Ubisoft game, and it needs multiplayer

RAGE 2 closely resembles a grind-fest from Ubisoft with lots of long-winded exploration.

DOOM fans will be happy to hear the BFG 9000 makes a return in RAGE 2.

RAGE 2 developers id Software has said they currently have no plans for a Nintendo Switch version of the coming title.

Bethesda's radical FPS gets some new gameplay with fresh details.

RAGE 2 may miss an interesting opportunity for online multiplayer engagement and shenanigans.

NEWS
RAGE 2 could possibly be heading to the Nintendo Switch

The original RAGE director has said that RAGE 2 could see a Nintendo Switch release in the future.

NEWS
RAGE 2 will be a service game, monetized via Creation Club?

RAGE 2 will indeed be a service game, an id dev confirms, but how will it be monetized? Creation club? Cosmetics? We have some predictions.

Bethesda confirms RAGE 2 is real, game world is set in a dystopian world devoid of society, law, and order.

id's big new game at E3 2018 should be RAGE 2, and it could have more expanded online drop-in/drop-out co-op and multiplayer action.

The Rage 2 from Patriot may be the quickest high capacity USB thumb drive we have tested, but write speeds let things down. Here' our full review. 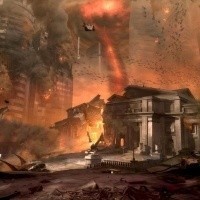