We found 6 items for the tag: RADIATION

The US Pentagon has revealed the weapon that they are most afraid of and how they plan to counteract it with a wearable device.

Fungi that is attracted to radiation is slowly, but surely neutralising the Chernobyl nuclear fallout.

Astrophysicists have suggested that gamma-ray jets from a blazar could actually travel faster than the speed of light. 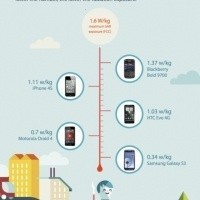 According to Tawkon, the iPhone 4S releases 3x as much radiation as the Galaxy S3.