We found 9 items for the tag: PIRANHA GAMES

1-year exclusive, with the developer offering full refunds for Steam version until September 1.

Battlefield V, Metro: Exodus and Shadow of the Tomb Raider are only a few games powered by NVIDIA's RTX technology.

Mechwarrior Online is getting even more competitive by entering the eSports world with a $100K prize pool to get people interested in playing. 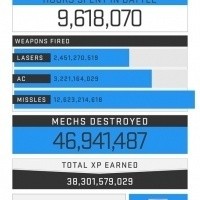 After nearly an entire year in beta, MechWarrior Online launches on September 17.

MechWarrior Online gets its debut trailer, and boy-oh-boy is it stompingly awesome.

NEWS
MechWarrior to stomp back into gaming in 2012, PC-exclusive

MechWarrior is coming back, arrives in 2012 and will be a PC-exclusive title.