We found 42 items for the tag: OCZ TECHNOLOGY

Rumors are beginning to surface that suggest that OCZ may be headed towards its end of life.

Vector 150 120GB comes with 128GB of NAND flash. Overprovisioning moves the user capacity down to 120GB, but steady state performance gets a boost.

OCZ's stock plummets in early morning trading, down over 23-percent and is expected to fall farther before the close of the markets. 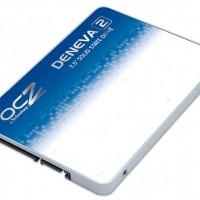 OCZ's Vector 128GB is one of the highest performing drives on the market today in RAID 0. Now at under $1 per GB, it could be a setup to consider.

The rapid drop in 25nm flash availability and slow ramp up of 20nm production puts OCZ in a tough position. Vector availability is about to get scarce and Vertex 3.20 can't be profitable at less than $...

OCZ recaptures the performance lead and brings a new product line to market. Meet Vector, based on the Indilinx Barefoot 3 controller, Indilinx's first new controller since the OCZ acquisition.

At less than $1 per GB right out of the gate, this OCZ SSD is already a making waves, but can it still float after Chris gets finished with it?

The OCZ Vertex 4 is out, but when it comes to performance in the 120/128GB capacity size, the Vertex 3 Max IOPS is still hard to beat.

The largest Vertex 3 has seen its cost reduced to half of what it was on launch and is still a flagship offering even though Vertex 4 is quickly catching the aging drive in performance.

It became clean in our initial test that the Vertex 4 would have to work for the crown. Kings aren't made overnight so OCZ plotted a course to the title and are working to pick off the competition one...

The baby Vertex 4 128GB SSD grows up and with this newest firmware, it has quite a roar indeed.

OCZ increased the Vertex 4 performance with a number of small improvements that add up to sizable increases.

With the new firmware in hand we retest the Octane 512GB and see how it goes this time around.

SANRAD has been acquired by none other than OCZ in a deal worth approx. $15 million.

Several of these high speed SATA II drives have been located and are now priced at less than $1 per GB thanks to an exclusive deal with MDD & TweakTown!

With a massive capacity and nearly unlimited performance, the RevoDrive 3 X2 will be a great addition to your workstation.

On the surface the OCZ Agility 3 has everything you want in an SSD, but a deeper look reveals a darker side.

Max what? I thought Vertex 3 was the big dog? - Chris sets us straight about OCZ's new flagship SSD.

Our first 240GB Vertex 3 in-house was a pre-production unit with early firmware that left it slower than the 120 model we looked at later. We now have the retail 240 in and are even more impressed.