We found 8 items for the tag: NORTHROP GRUMMAN

The United States Air Force has unveiled its new stealth bomber, introducing the B-21 Raider, the Air Force's first bomber in more than 30 years.

NEWS
U.S. boosts ISS for the first time without needing Russia to help

The United States has used Northrop Grumman's Cygnus spacecraft to boost the International Space Station back to a higher orbit.

NEWS
Russia announces it will stop selling rocket engines to the U.S.

Dmitry Rogozin has announced Roscosmos will not sell rocket engines to companies in the United States in response to sanctions.

NASA has awarded a total of $415.6 million in contracts to private companies to work on designs for new commercial space stations.

NEWS
NASA will livestream Cygnus spacecraft's departure from the ISS

Three months after being deployed on a resupply mission to the International Space Station, the Cygnus spacecraft is coming home. 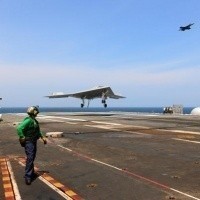 NEWS
X-47B makes its first landing on an aircraft carrier, the aircraft just took a giant leap for unmannedkind

The X47-B has just something incredible, it has landed on an aircraft carrier, unmanned.