We found 18 items for the tag: NIC

TRENDnet puts USB-C to the test with its own 5Gbe ethernet networking adapter. Join us as we test it out and see what it can do.

Could the Solo 10G be the best NIC upgrade available?

ASRock delivers 5Gbit LAN to its Z270 SuperCarrier and other motherboards. We explore the benefits of the faster network speeds on offer.

Running a heavily virtualized environment? Read on as we take a look at the quad port gigabit NIC from StarTech, and see how it performs. 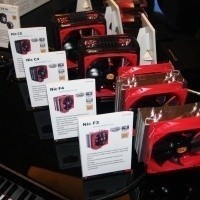 Alienware will be the first to ship a laptop featuring the new Killer Wireless-N 1202.

Visiontek and Bigfoot partner up for GPU + NIC combination - bites other GPU's and spits their heads.