We found 9 items for the tag: MULTI-MONITOR

This is what I sit in front of everyday, all of these pixels 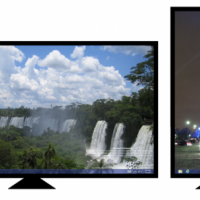 Before the official Eyefinity 6 launch from ATI.

It seems like a decent quality triple monitor stand has finally been released. We find out if it's as good as it looks.

Mass monitor support without the need to go 5870.

NVIDIA has just released one of its biggest driver releases in quite a while. We analyze them under XP and Vista today.