We found 6 items for the tag: MEMORIGHT

MemoRight is one of the first SSD manufacturers other than Samsung to display a new TLC SSD. 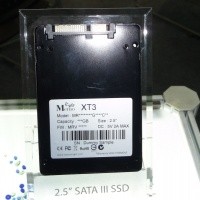 MemoRight show off an impressive SSD at Computex 2013.

MemoRight takes on the mSATA market with a new SandForce SATA III design and manages to put 256GB of flash on it.

It's like the full size model, only thinner and a little faster. Ultrabook buyers, pay close attention to this SSD.

The most under rated SandForce Driven partner launches their best product ever. If you've yet to purchase a SATA III SSD, you will want to read this review.

Memoright has displayed an 800GB SSD to scare your wallet.