HTC gives you all the kawaii faces you will ever need with their M8 smartphone - pre-installed!

HTC One M8 globall launch is April 11, but most Asian countires will have to wait until early May to get the smartphone.

NEWS
LeakedTT: The next-gen HTC One gets outed in new comparison video

The new HTC One leaks again, this time in video form, gets compared to the current HTC One.

NEWS
LeakedTT: 2014 edition of HTC's One gets spotted in official render

HTC's 2014 of its flagship HTC One smartphone has been outed in an official rendering leaked by @evleaks.

HTC's M8 / One two / One+ sees its new home screen leaked, shows off what appears to be a redesigned Blinkfeed. 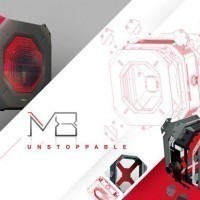 ASRock is said to be very close to launching its highly anticipated M8 barebones system, the result of a collaboration with BMW Designworks.