We found 25 items for the tag: LUCID

Tesla is expected to roll out a software update that will significantly improve the sound in Tesla cars through the use of Dolby Atmos.

Lucid will show off the full Air lineup for the first time during an event later this month - as the automaker scrambles to keep up with production goals.

Luxury automaker Lucid still struggles to manufacture and deliver its Lucid Air, but has some shiny new accessories for its luxury EV.

Well, it may have taken some revision, but it looks like Lucid is on track to meet its yearly production goal - as the #EV market picks up speed.

SilverStone's Lucid LD01 mid-tower computer case takes center stage as we investigate what it's all about. 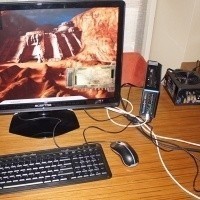 We look at Lucid Virtu MVP; a big technology for the upcoming Ivy Bridge platform due later this month. Is it any good, though?

Having looked at the X58 Sapphire offering a few months back, we now see what's going on with the P67 one.

Allows you to use DX11 and the Sandy Bridge GPU at the same time.

The MSI 870A Fuzion is the first motherboard with an AM3 socket that supports dual GPUs from both NVIDIA and AMD. Having already looked at a mixed bag with X Mode testing, today we focus on its A and...

Now that we have taken a look at the MSI 870A Fuzion and its basic performance, let's look at what we all want to know about the X-Mode performance.

Free the VGAs, Equal Rights for All.

Pairs it with the AMD 870 chipset.

NEWS
Lucid and Intel working on something big

But will AMD(ATi) and nVidia let them?