We found 29 items for the tag: LLANO 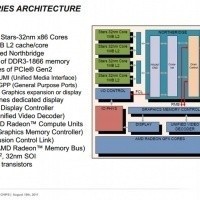 NEWS
AMD continue to fib on their transistor count, this time with the Llano Fusion APU

Perhaps the perfect candidate for your next HTPC build?

MSI send us over an A75 board that stands out from the pack thanks to its mATX format. Let's check it out and see how this smaller offering goes.

Sapphire jump on the A75 bandwagon with a new motherboard. Hopefully it does more for us than their P67 board we looked at a while back.

We examine the GPU performance of the new A8-3850 APU from AMD and complete our extensive look at the new Llano platform.

While we're still a few days away from the Llano launch, ASUS has today unveiled its A75 motherboard.

We look at the GIGABYTE A75-UD4H - a board for the new Llano APU desktop platform that's coming soon from AMD!

We can tell you a little of what to expect from the new AMD cards launching this week.

AMD shows off their Llano APU - running AvP with DX11.