We found 5 items for the tag: LEBRON JAMES

GM gets LeBron James to promote their Hummer EV at Super Bowl 2020 in new advertisement.

Not being the most hard-core basketball fan around, Simon finds the almost perfect game for everyone with NBA 2K14 on the Microsoft Xbox One console. 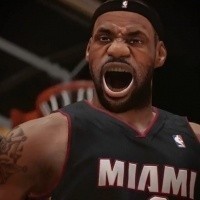 Lebron James talks to digital self in NBA 2K14 teaser.