We found 10 items for the tag: JOHN ROMERO

After four years of development, Romero is ready to reveal his brand new shooter.

Blackroom's fundraiser put on hold so Romero and Carmack can make a new gameplay demo.

John Romero will unveil his new first-person shooter on April 25.

John Romero, of Quake and Doom fame, is definitely working on a new game and a few small, but key, details have surfaced.

John Romero is definitely working on something new, though he was rather coy with any details. Hopefully more information will come soon.

NEWS
John Romero, co-creator of Doom, is working on a new shooter

Some of you might remember John Romero, with his last game being Daikatana. Well, he's making a new shooter. 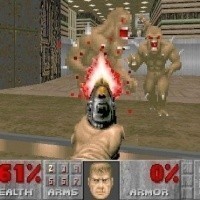 John Romero is talking about a new FPS MMO game that he is designing.