We found 18 items for the tag: IOSAFE 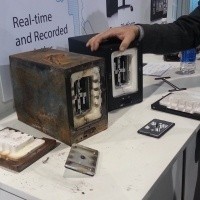 NEWS
ioSafe bring data redundancy to the mix with N2

ioSafe bring data redundancy to the mix with N2 at CES 2013.

ioSafe Thinks TweakTown is Great and the Real Story Behind Tesla Testing.

ioSafe demo-lition 2012 and the Cage of Death.

Looks the old mode, except full of holes for silent operation.

Maker of tough stuff, ioSafe now protects your data on the go with the new Rugged Portable.

With the disaster on the East Coast, it's now time to remind you that data should be kept safe.

ioSafe go nuts with new release - pretty much invulnerable even to a Terminator.

ioSafe is back with two new disaster proof models. One features USB 3.0 and the other eSATA. Today we look at the new SoloPRO eSATA and see exactly what disaster proof really is.

Burn it, flood it, crush it and more.

CES will see bulldozers trying to kill it.

You may have a RAID 6 array with battery backup, but what is that going to do for you in Katrina like conditions?