We found 6 items for the tag: INTEL NUC

NEWS
Intel shows off Broadwell-U based NUCs at CES 2015

Intel teases its small dongle-like PC at CES 2015, as well as the new Broadwell-U based NUCs.

Intel is working on two new NUCs based on its upcoming Broadwell chip, dubbed "Rock Canyon" and "Maple Canyon"

BLOGS
Intel's NUC, and other devices like it, are the future of desktop PCs

I'm currently in love with the new Intel NUC, but it's not getting as much love in the industry as it should 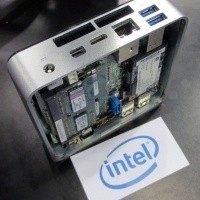 Intel showed off its Haswell-powered NUC unit at PAX Prime 2013.