We're moving away from X99 motherboards to check out the newly released HIS R9 285 IceQ X2 2GB OC video card. How does it perform? Check out our results.

Today Shawn looks at another overclocked AMD Radeon R9 280 GPU based video card, the HIS R9 280 IceQ X2 OC 3GB. Take a look and see what he thinks of it.

Moving away from the higher-end video cards as of late, we check out the mid-range HIS R9 270X IceQ X2 Turbo Boost 2GB OC. Let's see what Shawn thinks.

The other day we got a chance to look at the HIS R9 290 iPower IceQ X2 Turbo. Today we look at the R9 290X variant and overclock it to see what it can do.

Today Shawn spends some time checking out the HIS Radeon R9 290 4GB IceQ X2 Turbo. Is this video card suitable for your next gaming rig? Let's find out.

AMD recently launched the non-X version of the 270. We take a look at the HIS variant to see what's going on with the IceQ X2 model.

We take a look at our first retail Radeon R7 260X 2GB video card from HIS and look at its gaming overclocking performance in detail.

We overclock the HIS Radeon HD 7970 3GB IceQ X2 video card with its new "iPower" improved power setup and see how it performs under our benchmark tests.

HIS brings a dual GPU Radeon HD 7970 video card to the market and we find out if it's something you want. Is there really any question about it, though?

We have a look at the new IceQ X2 version of the Radeon HD 7950 3GB from HIS and see how it overclocks today. 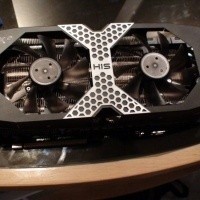