We found 8 items for the tag: HYBRID MEMORY CUBE

The HMCC 2.0 spec is released to the public as Micron and others display the latest HMC technology at Supercomputing 2014.

Micron announces that it has licensed Avago's 28nm Low Power 30Gbps Serializer/Deserializer IP for use in its next generation Hybrid Memory Cube tech. 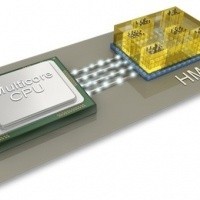 The Hybrid Memory Consortium shows off their HMC Specification 1.0, capable of 320GB/sec bandwidth.