We found 12 items for the tag: HOUSE OF CARDS

The story of the Underwoods comes to a close in S6 of House of Cards, streaming on Netflix on November 2.

Frank Underwood gives chills in the latest S4 trailer to House of Cards.

NEWS
House of Cards season four will premiere on Netflix on March 4, 2016

President Underwood takes to the screens during the GOP presidential debate, teasing House of Cards S4 for March 2016.

Frank Underwood was filmed at 6K in the third season of Netflix's House of Cards.

The new season of House of Cards hit Netflix for a very short amount of time, but it was a 'technical glitch' and pulled almost immediately.

Netflix teases season 3 of House of Cards, which returns on February 27. 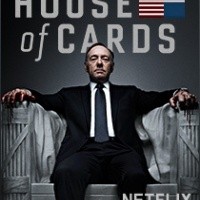