We found 13 items for the tag: HOME AUTOMATION

Tyler reviews D-Link's DCS-935L HD wireless camera and ends up being impressed with its 802.11ac Wi-Fi tech and the reasonable asking price.

Monitor your entire home's power consumption with this straightforward power monitor from Efergy in the Elite Classic.

SmartThings, a home automation startup, has Samsung's eyes attached to it for an $200 million acquisition.

In celebration of Earth Day, Google has just released Nest's new intelligent thermostat on Google Play for $249. Will you buy one?

The wide adoption of smartphones and tablets helps drive interest in home automation features, which continue to grow as providers also push services.

Nest gets picked up by Google for $3.2 billion.

RumorTT: Home automation to be a very big part of Apple's upcoming iWatch. 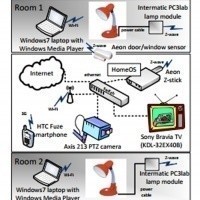 NEWS
Microsoft intros HomeOS, wants to be inside your house looking outside your... Windows