We found 9 items for the tag: HELIUM

Seagate is first to the market with 20TB HDDs. Helium-filled and fast, both are right at home for NAS or Datacenter apps or Chia.

We check out the new WD Red WD80EFZX NAS hard drive with HelioSeal helium-filled Technology and a massive 8TB capacity. Is it your next drive? Read on.

Chris Bross from DriveSavers talks about the numerous challenges associated with data recovery.

Paul examines HGST's Ultrastar He6, which delivers the highest capacity and storage density in tandem with low power consumption and cool operation. 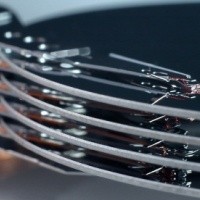