We found 21 items for the tag: HARRY POTTER

NEWS
Elon Musk: cryptocurrency rising in value is what you 'desire most'

Tesla and SpaceX CEO Elon Musk has said that your deepest and most desired thing in your heart is for cryptocurrency to rise.

WB Games delays its new PS5, Xbox Series X next-gen Harry Potter RPG into 2022 so it can 'give the game the time it needs'

A former Warner Bros. employee has been caught stealing $48,000 worth of Harry Potter merchandise.

Warner Bros. to work their magic in 4K.

REVIEWS
Fantastic Beasts and Where to Find Them Movie Review

Warner Brothers jolts the Harry Potter franchise back to life. And it's a real joy to dive back in with Fantastic Beasts and Where to Find Them.

The world's about to go 'Harry Potter' crazy all over again.

Harry Potter fans wanting to discover their own Patronus animal or creature can now do so through Pottermore's online website questionnaire.

NEWS
Could more 'Harry Potter' sequels be on the way?

Get ready to re-enter the Wizarding World.

Legendary character actor passes on, takes trademark voice with him.

Been holding out for a massive Harry Potter Blu-ray box set? How does a 31-disc extravaganza sound? 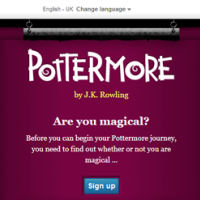 Pottormore Harry Potter fansite opens for all, sort of.