We found 20 items for the tag: HANDHELD

Nintendo only half-explains why it made the New 2DS XL handheld. We deliver the missing info.

AMD has the potential to enter the mobile phone SoC, or just graphics, market once again if there are any takers or partners that would like it.

NEWS
Windows 95 can boot up on a Nintendo 3DS handheld

Hackers get the yesteryear Windows 95 OS running on a New 3DS XL handheld.

NEWS
No friends? You can trade Pokemon with yourself - someone's done it

No friends? No problem! A nifty hacker has found out a way to trade Pokemon with himself. 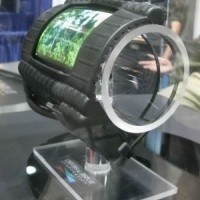 LG is planning on making flexible OLED displays for mobile devices, rumored to be "unbreakable"

NEWS
3DS Buzz is giving away a Red Nintendo 3DS

SImply leave a random comment at the bottom of the page to enter.

Said not to be launching in the US and Europe until early next year.

NEWS
Nintendo Wii U, everything U need to know, Wii tell it

Pilotwings may be a good series, but how does it fare on the new 3DS?

RIM announces PlayBook Tablet specs and distributors in US and Canada.

NEWS
Nintendo 3DS will most likely be region locked

Up to publishers to make non-region locked software.

The formidable PS3 franchise makes a successful transition to the portable world. Find out why developers could learn a lot from this one.