We found 3 items for the tag: GRAND CANYON

A new study has explored the Grand Canyon and has found that its missing around a billion years worth of rock that should be there.

Video of two women on a swing positioned over the side of a cliff has stopped hearts as it shows them falling off the cliffside. 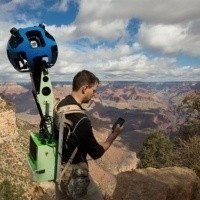 NEWS
Google Street View heading into the Grand Canyon, will allow lazy people like me to enoy the sights

Google heads into the Grand Canyon with its backpack version of their infamous Street View cameras.