We found 29 items for the tag: GAMING SYSTEM

ASK THE EXPERTS
Which should I pick - the ASUS ROG GA15DK or Alienware Aurora R10?

Ask the Experts: Alex has the choice between the ASUS ROG Strix GA15DK or Alienware Aurora R10, and we help decide which is best.

Right in time for the holidays, we build a $700 gaming PC based on a Supermicro motherboard that will keep most quite happy! 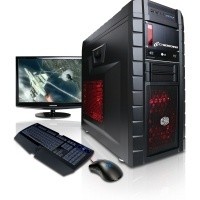 Cyberpower plants a GTX 690s at the heart of several of its desktop systems.

For as little as $10 USD you can have a chance to help the people of QLD, Australia and win this bad boy. Let's check out this Dream System in detail!

CyberPower launches the Fang Series. Did Chris get bitten by the Black Mamba?

Don't Fear the Reaper! - Chris shows off an extra special new Core i7 gaming system from Smooth Creations today, influenced by none other than... us!

PRESS RELEASE
CyberPower offers Core i7 920 based PC at Newegg

Full report from Rahul himself.

PRESS RELEASE
iBUYPOWER gets permission to use TT's Xpressar