We found 31 items for the tag: GAMING SERIES

Another day, another Intel X99 Express-based motherboard is up for review. Today we check out the MSI X99S GAMING 9 AC. If you're a gamer, take a look.

It might be small, but we're going to find out what kind of punch the new GTX 760 MINI-ITX Gaming OC from MSI packs. Let's see what Shawn has to say.

We take a look at our first non-reference cooled Radeon R9 290X to hit our labs. Let's see just how this new model from MSI performs.

We check out another motherboard using the Intel Z87 chipset. This particular one is from MSI and part of the Gaming series. Let's take a look at it.

We've been working our way through the MSI Twin Frozr Gaming OC GTX 700 series video cards recently. Today it's all about the NVIDIA GeForce GTX 770 model.

We're checking out the new NVIDIA GeForce GTX 780 GPU in the form of the 3GB Twin Frozr Gaming OC Edition from MSI which falls under the new Gaming Series brand. 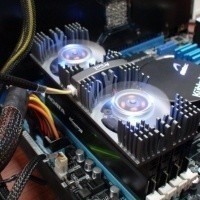 Runs hot, does need active cooling at this stage of development.

A-DATA mix it up a bit and double the normal Dual Channel kit to 8GB. How's it fair in our testbed? Let's take a look and see.

The gaming series from A-DATA get's a new high speed kit; can it impress us like previous A-DATA series.