We found 4 items for the tag: DEV

Android Wear is coming to Pebble, this means more apps, more support, better dev support and an easier time for all. 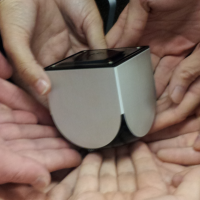