We found 4 items for the tag: COSPLAY

NEWS
With a long break between episodes, take a look back at Star Wars fans

With 3865 between Star Wars cinema showings, take a look back at a little history of premiere waiting lines. 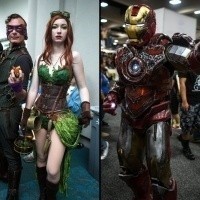 NEWS
Missed Comic-Con this year? No worries, because Tested.com has 800+ cosplay images to share

Tested.com post over 800 cosplay photos from SDCC! Awesomeness awaits inside!