We found 19 items for the tag: CACHE

The $30k CEVO S7 finals are over with not a single CS:GO release day map played in the series.

CCleaner is one way to clear out unwanted files on your hard drive, v5.07 is here with Win 10 support and a massive sale off the professional edition.

ADATA says it will show off its XPG Gaming series RAM and SSDs at COMPUTEX 2015.

If you're rocking an HDD for gaming this is very good news, bring on SSD speed without an SSD!

Samsung wades into the software caching pool for their enterprise offerings.

Plextor first displayed PlexTurbo and the M6 PRO SSD back in June, but since then little has leaked about the product... until now. Let's take a look! 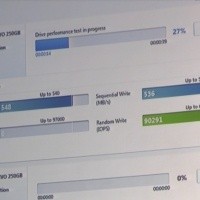 Don't want to get rid of your hard drives just yet? Consider this solution then.

Toned down cooling, but much smarter and loads of monitoring.

GIGABYTE brings us a board that makes use of Intel's Smart Response Technology with an SSD onboard. Let's check it out.

NEWS
OpenDNS and Google combine powers, speed up the web

OpenDNS and Google team up to speed up the web.

Side by side quick look video at performance benefits.

Turn Your SSD into a Cache Creating 8X Performance.