We found 49 items for the tag: BULLDOZER 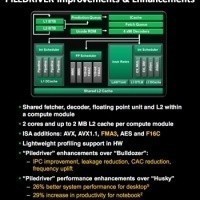 AMD FX-8150 and Microsoft patch put through some tests.

Bulldozer continues to sell-out, surprises many.

We check out the cheapest Bulldozer supported board so far. Let's find out how the ASUS M5A97 Evo goes.

NEWS
AMD's Piledriver, they need to get this right, while dodging constant bullets from Intel

AMD Piledriver, the correction of Bulldozer?

We check out our first 990FX board post Bulldozer launch and see what ASRock and Fatal1ty are doing with the chipset.

NEWS
AMD's shares bulldozed by over 5-percent in the past week, over 50-percent in 6 months, thanks, Bulldozer?

Not unlike Llano, we hear good things about memory overclocking on the Bulldozer platform. Let's check it out and see for ourselves.

We throw three HD 6970s into both our Z68 and 990FX setups and see what happens with our overclocked CPUs.

To help round off our final thoughts on the FX-8150 CPU, we check out the gaming performance and give you a true run down on Bullldozer.

AMDs Bulldozer finally sees the light of day. We only have one question. Is it any good? Let's take the time to find out.

We're getting real up in this place. Let us tell you what has happened to the Bulldozer launch and why it's AMDs fault.

NEWS
AMD FX-8150 to take on Core i7-980X and 2600K, pushes them up against a wall and mugs them of their price-performance crown

NEWS
AMD sets a world overclocking record with a Bulldozer at 8.429Ghz!

AMD looking to make a bigger splash with eight models in its first FX wave.

AMD Bulldozer details, get ready to be excited.

But looking more like October before light of day.

As great as the Crosshair V Formula is, if you want to get in on the 990 action for a little less, the M5A99X EVO from ASUS could be the board for you.

GIGABYTE fuses the new 990FX series chipset from AMD to the much loved UD7 series. Let's check it out.

AMD have setup a dedicated page for the new Bulldozer line of CPUs.

NEWS
Sandy Bridge and Bulldozer to both support LR-DIMMs

LR-DIMM gets a bit of a show off - flicks it's hair just as fierce as Willow Smith.