We found 8 items for the tag: BSOD

ASK THE EXPERTS
How to fix blue screen of death after installing Radeon RX 5700 XT?

Ask the Experts: Quintin received an AMD Radeon RX 5700 XT from a friend and after installing he is seeing BSODs. We try to help.

Ask the Experts: Dan added an additional memory module to his rig and is now seeing BSODs while gaming.

Microsoft is allegedly going to be adding QR codes to their BSOD's to help make it easier to ascertain what's wrong with your PC.

NEWS
Sony tells users not to upgrade to Windows 10

Sony warns that upgrading to Windows 10 will become a disaster for many of its users and is currently working on a fix.

ASK THE EXPERTS
My OCZ Vector SSD is having issues, is it the SSD or something else in my system causing the problems?

My system is having issues, is it my OCZ Vector SSD? 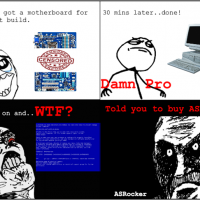 NEWS
Has ASRock overstepped a line with its Facebook troll of GIGABYTE?

NEWS
Gizmodo gets a BSOD in Windows 7

Complains the screen is too hard to understand.