We found 16 items for the tag: BROADWELL

Intel has just officially released details on its 7th Gen "Kaby Lake" Core processors and we cover just as much as we can right here.

We take a close look at Intel's Core i7-5775C 3.3GHz Broadwell processor. We tell you all about it and compare it against the Core i7-4790K.

Today we have a SoC product hot off the Supermicro assembly lines that uses the new Intel Xeon processor D-1540, the Mini-ITX X10SDV-TLN4F motherboard.

Steven takes us on a tour of GIGABYTE's BRIX s BXi5H-5200, a capable ultra compact mini PC that comes in at a solid price point.

Steven tells us all about GIGABYTE's BRIX BXi7H-5500, an ultra compact mini PC that he says packs a pretty big punch for its size.

Steven gives us a look at Intel's upcoming Broadwell 5th Gen Core processor family, what you can expect from it and what it means for you in 2015.

Intel is bringing a lot of features for its desktop processor and chipset lineups.

Intel is acclerating its plans for desktop processors: unlocked processors from enthusiast to entry-level series.

Intel is working on two new NUCs based on its upcoming Broadwell chip, dubbed "Rock Canyon" and "Maple Canyon"

Intel pushes back Broadwell until Q1 2014, says a defect density issue has caused them to be off schedule by a few months. 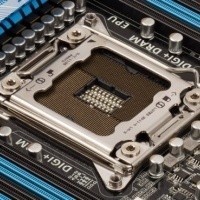