We found 6 items for the tag: ASUSTEK

ASUSTEK and AMD partnership for upcoming desktop APU may have some benefits, but would cause friction between the chipmaker and other motherboard makers.

By Q1 2014, both tier 1 brands to ship over 5 Million motherboards to meets its user's demand in China. 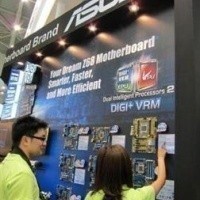 ASUS see the End of Times with Pegatron, will wind down ODM production of motherboards, and more thi.

Says they have been too conservative before.