We found 3 items for the tag: ASSANGE

Edward Snowden got some encouragement from Julian Assange to pick Russia over Latin America, for his own personal safety. 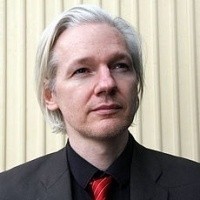