We found 6 items for the tag: AIR SERIES 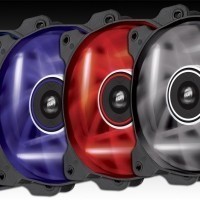 Corsair brings forth a plethora of new case cooling fans. Let's have a look at what they are offering.

Corsair unleashes the big brother to the A50 in air cooling. If the A50 is anything to go by, Corsair could well have a real winner on their hands here.

Corsair steps into the air cooling segment. Alongside the Hydro series comes the Air series. Let's have a look at the new A50 today.