Toshiba just announced their new SSHD models, and though they aren't showing it, we managed to sniff out a prototype.

It's been two years since Chris released his signature series that covers the SSD market. Today he talks about OCZ, next-generation NAND and more. 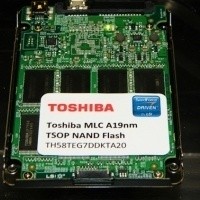 LSI SandForce's continues to lead the market as the first to deliver compatibility with Toshiba's A19nm NAND.