Most questions we received after our 840 EVO SSD reviews revolved around the latest version of Samsung's Magician software. Let's take a close look.

Wrapping up our coverage of the Samsung 840 EVO today, Chris looks at the new 750GB capacity size. The new 750GB EVO is priced to compete with many other's 512GB class products, but delivers higher capacity... 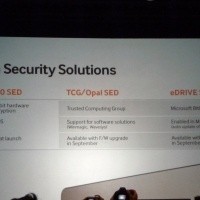 The most talked about SSD in 2012 finally makes an appearance. At this time there are two high-end drives fighting it out for the enthusiast performance crown, OCZ's Vector and the drive were looking...

Samsung's 840 returns for the second day in a row. This time Chris tests TLC flash paired with a tri-core MDX controller with the 250GB model. Will he love the low power or will the 240MB/s sequential...

A number of next-generation SSDs are coming to TweakTown this week. OCZ, Intel and Samsung and others will follow after CES. Today Chris tests Samsung's low-cost 840 with TLC flash in the 500GB capacity...